Profiles of Champions for Women Veterans 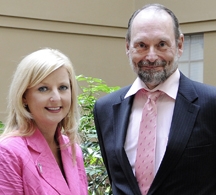 Connie Booth, Special Programs Coordinator, and Alan Tyler, Director
Tuscaloosa VAMC
When Connie Booth presented the idea of a "Pink Out" to Tuscaloosa VAMC (TVAMC) Director Alan Tyler, he told her to run with it. And she has. Now in its third year, the Pink Out Challenge is a VA-wide event. Employees are encouraged to wear pink on the designated Pink Out day during Breast Cancer Awareness Month in October and to take photos to determine the "pinkest facility" in the VA system. Connie has both Veterans and breast cancer survivors in her family; she also lost her mother to breast cancer, so the Pink Out carries a personal connection for her.

Connie has worked at the TVAMC for over 18 years. She started as an LPN on a medical unit and later helped open TVAMC’s first Primary Care Clinic; eventually she left the clinical setting for administrative work, currently serving as the Special Programs Coordinator in the Director’s Office. Connie credits the support of the TVAMC leadership for its commitment to women Veterans and openness to new ideas, which enabled her to follow her inspiration and promote the Pink Out Challenge to the success it is today. See photos*† from the 2011 Pink Out. Photos from the 2012 event are coming soon!

The new center will locate radiology staff together, enabling better coverage and productivity. The redesigned check-in and waiting space, with a private sub-waiting room for women, will accommodate the privacy and accessibility needs of women. Dr. Arndt and radiology team members Dr. Sidney Pollack, Dr. Luis Diaz, Maureen Sullivan, Barbara Gaughan, Phyllis Arduino, and Pam West have been instrumental in making the new imaging center a reality. The center was not part of Transformation Initiative funding, but the radiology team outlined a multitude of advantages for all patients and the Boston Healthcare System decided to build it.

During the long design phase, the radiology team has responded rapidly to Veterans' suggestions. When a patient complained about her words being overheard in an ultrasound room, radiology staff quickly had a wall erected and the room redesigned to preserve confidentiality. In another instance, Women's Health input led to speedy rewriting of radiology policies to include screening patients about pregnancy, breastfeeding, and co-sleeping with infants. 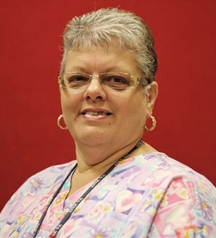 Carmen Ortiz, RN
The Villages Outpatient Clinic, North Florida/South Georgia Veterans Health System
To represent all those who have been affected by breast cancer, Carmen Ortiz started an annual one-mile Breast Cancer Awareness Walk at The Villages Outpatient Clinic (TVOPC) in Florida, part of the North Florida/South Georgia Veterans Health System. The walk around the clinic is a time for pink-clad employees to honor and remember those who have lost their battle to this disease, those who are survivors and can celebrate a new level of life, and those who have lost countless number of nights caring for their loved ones, never giving up hope, believing in the cause and trusting in a better future for tomorrow.

In addition Carmen is the liaison for the Women’s Health Clinic. In this role, she creates and coordinates programs to meet the needs of women Veterans. When the Women’s Health Clinic transitioned from a Community Based Outpatient Clinic (CBOC) to an Outpatient Clinic at TVOPC in 2010-2011, Carmen saw the transition as an opportunity for growth. She initiated process improvements to increase access and availability to the Women's Health Clinic. As a result of her initiative, access improved and the backlog of appointments was eliminated.

Jennifer Roberts
WVPM, VA San Diego Healthcare System
Jennifer Roberts brings innovation to her role as Women Veterans Program Manager at the VA San Diego Healthcare System. In August, she worked with the Ford Motor Company Fund, which donated $5,000 in infant car seats and baby blankets to recent and expecting mothers who rely on VA for obstetrical care. Nearly 25 Veteran mothers received their gifts in a ceremony held in mid-August.

In 2011, Jennifer launched a Clothesline Project at the San Diego VA to give a voice to victims of military sexual assault. Through this project, victims are encouraged to decorate shirts, which are publicly displayed at San Diego VA facilities during a week in April. In its second year in 2012, the project drew 40 participants and the display was covered by four local media stations and broadcasted to an audience of millions across San Diego County. 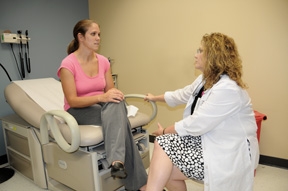 Tulsa Women's Clinic Staff
Ernest Childers VA Outpatient Clinic
In Eastern Oklahoma, female Veterans have a new Women Veterans Clinic and a team of providers who go beyond providing primary and gender-specific health care. The Ernest Childers VA Outpatient Clinic opened in Tulsa in June 2012 and the clinic team, led by nurse practitioner Sharalee Savage, encourages patients to develop personal health goals. Along with Cindy Orr, patient services assistant; Debbie Barnes, registered nurse; and Tammy Whaley, licensed practical nurse, Sharalee works with each woman Veteran to meet her personal goals. "We listen and offer advice, encouragement and assistance to help them meet their goals," said Sharalee. At the clinic, the Veteran is at the center of her health care. To symbolize this patient-centered approach, the waiting room features a photo collage of each staff member with a mirror in the center. 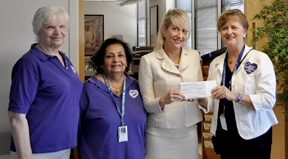 Members of the Ladies Auxiliary Military of the Purple Heart
Fresno Medical Center
The Ladies Auxiliary Military Order of the Purple Heart (LAMOPH) goes the extra mile to serve women Veterans in VA Central California Healthcare System. LAMOPH and the Fresno Medical Center’s Women’s Health Clinic partnered to provide female Veterans with resources for their children. LAMOPH donated $2,500 in Walmart gift cards for women Veteran mothers to buy diapers, formula and other baby necessities. Women Veterans in the homeless program also use the gift cards to buy household items when they find housing for themselves and their children through the HUD-VASH program. The members of LAMOPH, several of whom are Veterans themselves, also volunteer in the Women’s Health Clinic at the Fresno Medical Center, serving as mentors who provide counsel and support to female Veterans. 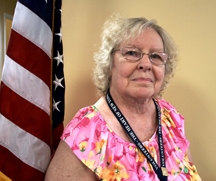 Virginia Robbins
VA Volunteer and Member of the American Legion Auxiliary, NYS 7th District
VAMC Canandaigua, NY
Virginia Robbins volunteers in numerous capacities for the VAMC in Canandaigua, NY; most notably, she is the organizer of an annual women Veterans event, which recognizes area female Veterans and their contributions. The event is in its 15th year. Virginia and the American Legion Auxiliary also collect hundreds of toys for children of Veterans at the Rochester Outpatient Clinic, enhancing the clinic’s family friendly atmosphere.

David Sly, DO
Sioux Falls VA Health Care System
Even when faced with competing priorities, David Sly has advocated for health care enhancements for women Veterans and has worked with VA staff to make them happen. As CBOC Medical Director for the Sioux Falls VA Health Care System, David ensures that the system’s 5 CBOCs have designated women’s health providers (he is one of them) and regularly encourages providers to attend the women’s health mini-residencies for additional training in women’s health topics. Amidst a system-wide push to reduce the amount of fee-based care, David advocated for mammography services in CBOC communities so that women Veterans wouldn’t have to drive more than 50 miles to get a mammogram at a contract facility. Women are now afforded the choice of closer-to-home mammography services thanks in large part to David’s leadership and advocacy.

Diane Harness-DiGloria, DNP, ANP-BC
Viera VA Outpatient Clinic
"You've come to the wrong place. We take care of men here," some people told Diane Harness-DiGloria in 1988, when she began working at the Brockton campus of the Boston VA Health System, looking to work with women. Today, Brockton VA is a place for women Veterans thanks to Diane's persistence and creativity. She worked for 10 years to establish a separate women’s clinic at Brockton. The women Veterans she cared for as a women's health provider and Women Veterans Program Manager are currently trying to have the clinic named after her. Meanwhile, Diane is now at the VA Outpatient Clinic in Viera, Florida, where she serves as Women's Health Coordinator while developing a yoga and meditation program for women Veterans with post-traumatic stress disorder—a grant-funded pilot program that has been so successful she is now expanding it to include classes for male Veterans as well.

Nancy Lutwak, MD
Manhattan Campus, New York Harbor Healthcare System
Nancy Lutwak helped develop a dedicated Women Veterans' Treatment Room in the Emergency Department at New York Harbor Healthcare System’s Manhattan Campus. Now women Veterans have a private suite in the emergency department where they can be examined and interviewed in a secure and calm environment and schedule expedited primary, preventive and specialty care follow-up appointments within VA. In addition to making female Veterans more comfortable, the women-designated room provides an opportunity for physicians to screen for Military Sexual Trauma, offer mental health counseling services and improve continuity of care. Nancy, an attending physician in the emergency department, has assembled an interdisciplinary team of female clinicians to gather data to document the effectiveness of the private emergency room. The room is part of the Women Veterans Healthcare Quality Improvement Project at the Manhattan Campus.

Meri H. Mallard, RN, MSA
Deputy Field Director, National Women Veterans Health Program
Meri Mallard has worked at VA since she came out of the Navy Nurse Corps in 1975. As Women Veterans Health Deputy Field Director for the Southern Region since 1999, she has supervised dozens of Women Veterans Coordinators and in 2008 helped facilities in her region navigate the transition from part-time Women Veterans Coordinators to full-time Women Veterans Program Managers (WVPMs). She is a mentor to WVPMs across the nation and a critical link between Women’s Health at Central Office and the field. But for Meri, the most important aspect of her job is “making a difference for women Veterans.” Meri recently talked to a woman Veteran in Milwaukee who had lost her son to suicide, her job, her home and was going through a divorce. Meri connected her personally with Jill Feldman, WVPM at the Milwaukee VA, and the VBA women Veterans coordinator. Meri followed up with Jill and was reassured to hear that VA is helping the woman. “It brings tears to my eyes just thinking about it,” said Meri. “Making a difference for an individual Veteran, that’s why I do what I do.”

Carol OBrien, Ph.D.
Bay Pines VA Healthcare System
Carol OBrien is best known for developing VA’s first residential Military Sexual Trauma program for women at Bay Pines in 2000. But her commitment to women Veterans started long before. In 1988, Carol, together with Mary "Toni" Lawrie, enlisted VA staff to volunteer at a Saturday clinic for women Veterans. The Bay Pines Well Women’s Clinic, as it was called before it was renamed the Mary Antoinette Lawrie Clinic following Toni’s death in 2010, was staffed entirely by volunteers and Carol was one of them. It was also one of only two such women’s clinics recognized in VA at the time. When Carol received an innovative program grant to open a residential MST program for women in 2000, she stretched the two-year funding to last well beyond that. By the time funding did run out, the program was so successful and respected that the facility assumed responsibility for funding it. The program has been expanded and now offers residential services to men as well.

*By clicking on these links, you will leave the Department of Veterans Affairs Web site.
†VA does not endorse and is not responsible for the content of the linked Web site.

Get help from Veterans Crisis Line

If you are in crisis or having thoughts of suicide, visit VeteransCrisisLine.net for more resources.